There's no doubt the '90s and oughts had many incredible Japanese roleplaying games (JRPGs) for their time. Grand adventures to save the world from devastation and restoring the balance of peace and hope while gaining friendships through teamwork — in essence, livin' the dream.

So, what were the most underrated and cherished Japanese roleplaying games from the Playstation 1 console? Here's my totally unbiased, completely objective, 100% not based solely on my memories list of the top 10 best and underrated PS1 JRPGs of all time.

Meis Triumph, the protagonist, is a 16-year-old heir to a family of Spirit Blacksmiths in this fantasy game. Wielding a sword and having the ability to reforge weapons, Meis has to journey to find and defeat the Dark Acolytes — a mysterious organization of cyborgs.

And all while finding the perfect gifts for all the women he meets along the way, of course.

The Wild Arms franchise is a beloved series. Wild Arms 2 in particular brought a unique rendition to the JRPG world with the backstories and playthrough of Ashley the gunfighter, Brad the former war hero, and Lilka the teenage sorceress. Now, the first Wild Arms was awesome, but Wild Arms 2: Second Ignition brings a great punch to this underrated list of fantastic games.

Wild Arms 2 is set up in a world called Filgaia that resembles a combination of the American old west + Steampunk with a sci-fi fantasy twist (simple, right?). With turn-based combat and puzzles, the playable characters' lives eventually intertwine to face the demon Lord Blazer and the terrorist organization Odessa.

Wild Arms 2 was a big part of my childhood. I always thought Lilka was such a great character that I could relate to. A super cool sorceress who loved jelly donuts and used a magical umbrella? To this date, every time I eat a jelly donut I can't help but think about her and this game.

Diving into a world of musical and magical adventures, with lively humans, adorable puppets, precious creatures, zany villains, jealousy and romance, musical cutscenes, and magic spells of sweets and treats is Rhapsody: A Musical Adventure.

This quirky bubblegum tactical JRPG stars the heroine Cornet, a musician with a magical horn that grants wishes and who can communicate with puppets — two things that should never go together. She longs for romance and sets off for an adventure with her puppet friend Kururu to save Prince Ferdinand, who Cornet loves, from the evil witch Marjory, who also loves Prince Ferdinand but accidentally turns him to stone. Quite a dramatic Disney-like experience, but in a kawaii-esque ambiance. It's perfect for beginner RPG players or those who enjoy charming stories and musicals.

Warning, these songs will be stuck in your head until the end of time. I still sing the song "Evil Queen" all the time. It's a pretty fantastic song featuring the incredibly silly villain characters of Rhapsody.

Legaia is a world that makes up of three continents full of politics, power, and advanced technology. There are two dominant races in Legaia: humans and Seru. The Seru are powerful creatures utilized for military, daily chores, or sold for profit. The human's dependence on the Seru developed mad greed and evil desires that turned into a war of the Sol and Conkram nations within the kingdom of Karisto. Due to this, the Prince of Conkram used an elixir, a devastating Mist, to boost the power of the Seru that quickly turned into a pandemic, wiping out the nation of human lives years later. Classic mixup!

The survivors and heroes of the story, Vahn, Noa, and Gala, seek out to save the nations of Legaia and restore peace and humanity at last.

Legend of Legaia, with its deep backstory, menu-driven game style, and conditional turn-based combat highlighting the use of "ARTS" makes the journey into saving the world of Legaia quite entertaining and enjoyable.

Legend of Mana, the fourth installment of the Seiken Densetsu series, brings a charming rendition to the Mana world. With a beautiful soundtrack and a whimsical art style, Legend of Mana delivers a delightful game packed with action and adventure. And there's a bit of nostalgia from the past Mana games as a few creatures and monsters make a return.

There are many storylines and arcs within the game as you journey to restore balance and peace to the Mana Tree and the world of Fa'Diel. There's a sense of choose-your-own-adventure books that will eventually lead to the final story arc and the end of the game. The player creates new lands from artifacts found throughout the adventure while creating musical instruments to summon elementals to cast spells.

Legend of Mana has two-player compatibility, which was very innovative and exciting for a JRPG of its time. With the Mana remake for the Nintendo Switch and the Playstation 4, you can now relive this cherished JRPG without having to dust off the PS1.

This fantastic story is set 1,000 years after the events of Lunar: Silver Star Story Complete. Hiro, a young archaeologist, and his cat-like companion, Ruby, set off on an adventure with the mysterious Lucia, a strange visitor from the Blue Star, to stop the evil Zophar from destroying the world. They meet lively characters along the way to join in their quest of restoring peace to the planet of Lunar, which apparently can't keep from chaos for long.

Lunar: Eternal Blue is filled with magic and romance, intense battles, and deep character development. With engaging animated cutscenes and voice-acting dialogues, Lunar: Eternal Blue feels like both a game and an anime (which is the best of both worlds, in my opinion). The music of Lunar is filled with fantastic songs and is composed by Noriyuki Iwadare (who I had the pleasure of meeting once before, so clearly it's good).

The expanded class system was a great addition to this game, along with beautiful music.

In the town of Monsbaiya, there lies a Monster Tower where monster tamers go. The main character's father was a legendary monster tamer named Guy. But in an unfortunate event, Guy disappears in the tower never to be seen again. Koh strives to be a prosperous monster tamer, find the truth about his father, and rebuild the town to great success.

I truly enjoyed this game because of how exciting the town building was. Bowling alleys, casinos, libraries, and so many other fun additions to add and create goals for, as well as developing relationships from those renovations.

Not like a traditional JRPG, this tower-climbing-dungeon-crawler-adventure game has incredible elements of town-building, monster-catching, and the wooing of anime waifus. With gorgeous music, intense character backstories, and dungeon levels that generate randomly each floor, Azure Dreams is always a nostalgic hit for collectors and obscure gamers who like a challenge.

With phenomenal music, sassy characters, and hours of action and adventure is the classic Playstation 1 game, Brave Fencer Musashi. Along with infamous voice actors, a zombie-like pandemic, action figure collecting, and characters based on real-life individuals, Brave Fencer Musashi brings every radical element possible for a great experience the entire way through. Brave Fencer brings the best out of the roleplay world with real-time sword base combat, day and night sequence, mini-games, and puzzles.

The hero of this story is Mushashi the swordsman, who is summoned to defend the Kingdom of Allucaneet from the antagonistic Thirstquencher Empire (pretty tricky name there, guys). Musashi’s mission is to journey across the kingdom in search of the Five Scrolls to power up his swords and restore balance to Allucaneet.

Brave Fencer Musashi is one of my favorite games. Searching for the Minku creatures while humming "The Only Friend", rescuing the captured palace residents, and collecting action figures made the game fun along with the main story arcs.

The Lunar series has always been one of my most favorite and cherished series, and is worth revisiting your PS1 for. With loveable and quirky characters, intense combat battles and confrontations, beautiful music composed by Noriyuki Iwadare, and animated cutscenes, truly gives the magical world of Lunar beauty and light. The characters in Lunar: Silver Star Story Complete, the protagonists and the villains, have big engaging personalities. Every party member has skills that rely on weapons, magic, or healing. Throughout the game there are animated cutscenes and voice dialogue in interludes that truly bring the world of Lunar to life.

The adventure in Lunar: SSSC begins with four characters, which eventually leads to a whole array of fantastic additions to the team. The main protagonist, Alex, dreams of becoming a great Dragonmaster like his hero, Dragonmaster Dyne. Then there's Ramus, Alex's best friend who is motivated to adventure for the prize of wealth; Luna, Alex's childhood friend who was adopted by his family; and Nall, the flying cat-like companion of Alex. The three friends and Nall start a quest to seek a precious gem, which ends up becoming a journey of a lifetime when they meet the White Dragon Quark who commands Alex to travel the world and become the next great hero that the world desperately needs.

Lunar: Silver Star Story Complete is a classic game that should be in everyone's PS1 collection, or at least played through once. There are even bromides of the characters that are hidden throughout the game to be found. And speaking of hidden things, The Making of Lunar disk that comes with the Fan Art Edition of the game has a hidden pong game featuring the Lunar characters (the code is up-down-left-right-triangle-start — you're welcome!).

Please forgive me while I sing Luna's Boat Song from the top of my lungs — no shame.

And there you have it! My top 10 best and underrated Playstation 1 JRPGs. But is it even possible to limit a list to only 10? With incredible games like the Final Fantasy series, Chrono Cross, Legend of Dragoon, Suikoden, Xenogears, Grandia, Alundra, Vagrant Story, Vandal Hearts, Arc the Lad, and so on so forth! I could literally run out of breath (of fire!) with all the amazing JRPGs out there!

Now excuse me while I run off to play Trials of Mana and try to finish it before the Legend of Mana remake comes out in a few weeks ...

A Pixie by Day and a Goblin by Night, Brandy can be found waltzing around in bookstores while sipping a vegan chai latte or in bed catching up on anime series and writing her nerdy articles.

10 best-selling PlayStation 1 games you forgot about

The best home video game systems of the '90s, ranked 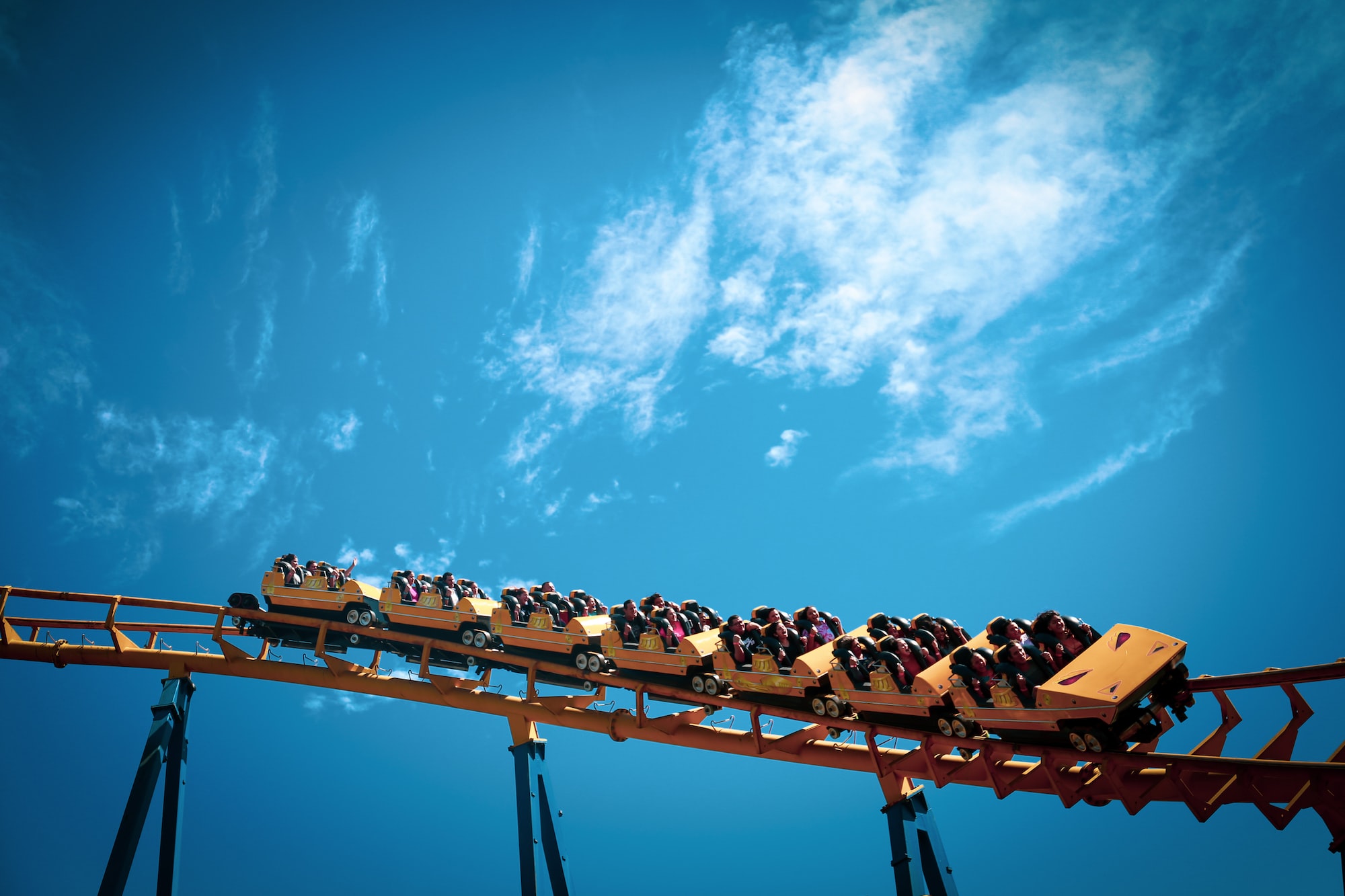 The key to a flourishing theme park in Roller Coaster Tycoon is the perfect balance of ride for all guests.
Jan 28, 2020
4 min read